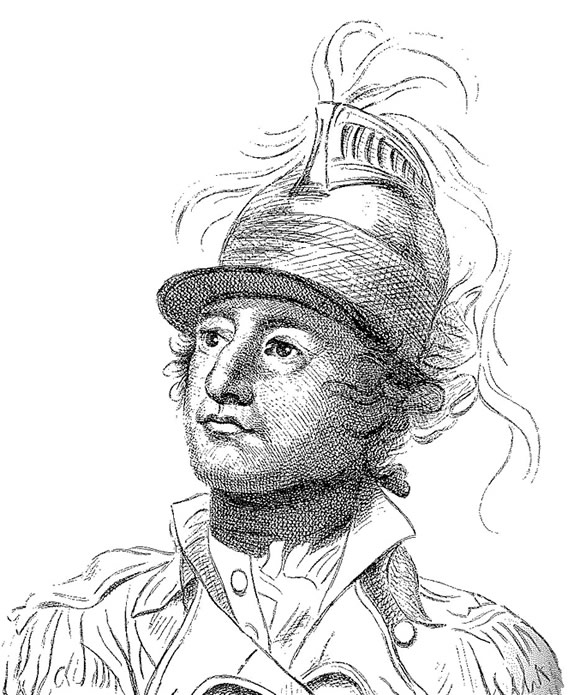 Who Was Benjamin Tallmadge?

Major Benjamin Tallmadge was born February 25, 1754 at the Presbyterian parsonage in Setauket, Long Island. He was the son of Rev. Benjamin Tallmadge and Susannah Smith. He spent his boyhood days in Setauket and later attended Yale where he graduated in 1773. Tallmadge was employed as a teacher in Weathersfield, Connecticut until shortly after the battles of Lexington and Bunker Hill when he entered the army. He was commissioned as a Lieutenant in 1776 and was engaged in the battle of Long Island on August 27, 1776. The following December, he was promoted to Captain of the 1st Troop of the Second Dragoons, and shortly after he was promoted to the rank of Major. Following this promotion, he was engaged in the battles of White Plains, Brandywine, Monmouth, Germantown and White Marsh. In 1777, he was instrumental in organizing a spy ring to relay information to George Washington, the Commander-in-Chief, and keep him informed of the British activities around New York City and Long Island. In this operation, Tallmadge assumed the name of “John Bolton.”

British troops had occupied Tallmadge’s native Long Island since the battle of Long Island. Consequently, he had a great desire to make raids on the Island and harass the British. Another patriot named William Booth had sent information that a small garrison of British soldiers and some refugees from Rhode Island had taken possession of, and built a fort at, the home of Judge William Smith at the Manor of St. George in Mastic. The Judge and his family had been forced to flee from their home after the occupation. Booth had also sent a diagram of the fort which the British were calling “Fort St. George.” After receiving this information, Tallmadge made a secret mission to survey the situation. Upon confirming the report, Tallmadge requested permission from General Washington to attempt an attack on the fort. The request was denied as being too hazardous. Shortly after, Washington received a communication from another in the spy ring, Abraham Woodhull, that the British had a very large storage of hay in Coram. Washington finally gave his permission for the raid on the fort providing it did not prevent the destruction of the hay in Coram which was the primary target.

On Tuesday, November 21, 1780, Tallmadge’s force of eighty men left Fairfield, Connecticut in eight open whaleboats and rowed across Long Island Sound landing at Old Man’s Harbor (now known as Mount Sinai). Upon arriving at Old Man’s Harbor, a storm developed and the men sheltered themselves from the storm under their overturned boats. After the storm passed, twenty men were left in charge of the boats and, at 7:00 p.m., the others began to march across Long Island to the fort in Mastic.

Two miles from the Manor House at the fort, Tallmadge’s raiding party stopped for some “refreshment.” It was now 3:00 a.m. on November 23rd. Tallmadge sent out scouting parties to review the structural layout of the triangular-shaped fort and confirm that there was a British garrison of about fifty men. An hour later, Tallmadge launched a three-pronged surprise attack. After a ten minute battle, the raiders captured the fort. Informed that a British ship was in sight of the fort, loaded with rum, wine, sugar and glass, Tallmadge detached a party to board and take the ship, removing her cargo and setting it afire.

After destroying the garrison buildings, supplies and ammunition at the fort, Tallmadge’s company marched away at 8:00 a.m. The major selected about a dozen men and together they took horses from the fort. He ordered his subordinate, Captain Edgar, to march the rest of the men and the prisoners to a spot “at the middle of the island.” Tallmadge and his now-mounted dragoons rode to Coram and set fire to a storage area consisting of over 300 tons of hay and forage held for the enemy cavalry. Tallmadge’s group then rejoined the marching unit and continued on to Old Man’s Harbor, where they arrived by 4:00 p.m. There, the entire party of Patriots pulled their boats from their hiding places and embarked across Long Island Sound, arriving back in Connecticut at 1:00 a.m.

During this daring mission, Tallmadge’s men traveled 20 miles by water and 40 miles on land, destroying enemy buildings, supplies, and a ship before their victorious return to home base. The American forces suffered no causalities in the entire attack. The British lost seven men and the remainder were taken prisoners and brought back to Fairfield. For these efforts, Tallmadge received the thanks of Congress and a personal congratulatory letter from George Washington.

For the rest of the Revolutionary War, Tallmadge recruited other spies, or temporary agents, who were willing to pass information and live for brief periods on Long Island. He believed that these agents were less likely of being caught than permanent agents-in-place. Although Tallmadge later participated in some other minor commando raids in Lloyd’s Neck and Huntington, his prime concern was “to insure the safety” of his agents through the end of the war. When the Treaty of Paris was signed on September 3, 1783, ending the Revolutionary War, Tallmadge was able to enter New York and ride down Broadway in his American uniform escorted by a few of his dragoons.

Major Tallmadge retired from the army at the rank of Colonel. On March 16, 1784, he married Mary Floyd, daughter of William Floyd, a Signer of the Declaration of Independence. Tallmadge’s father officiated at the ceremony.

Colonel Benjamin Tallmadge settled in Litchfield, Connecticut and became a wealthy man through several investments. In 1801, he was elected to Congress on the Federalist ticket where he challenged Presidents Jefferson and Madison on many occasions. He retired in 1817 and devoted himself to establishing a training school for Native American and Asian missionaries. He died, at age 81, on March 7, 1835. To the end, he praised the efforts of those “untrumpeted and unknown” members of his spy ring who helped secure victory against the British.

Congressman Benjamin Tallmadge and His Burial Site in Litchfield, Connecticut

Who is Benjamin Tallmadge?

Major Benjamin Tallmadge was born February 25, 1754 at the Presbyterian parsonage in Setauket, Long Island. He was the son of Rev. Benjamin Tallmadge and Susannah Smith. He spent his boyhood days in Setauket and later attended Yale where he graduated in 1773. Tallmadge was employed as a teacher in Weathersfield, Connecticut until shortly after the battles of Lexington and Bunker Hill when he entered the army.